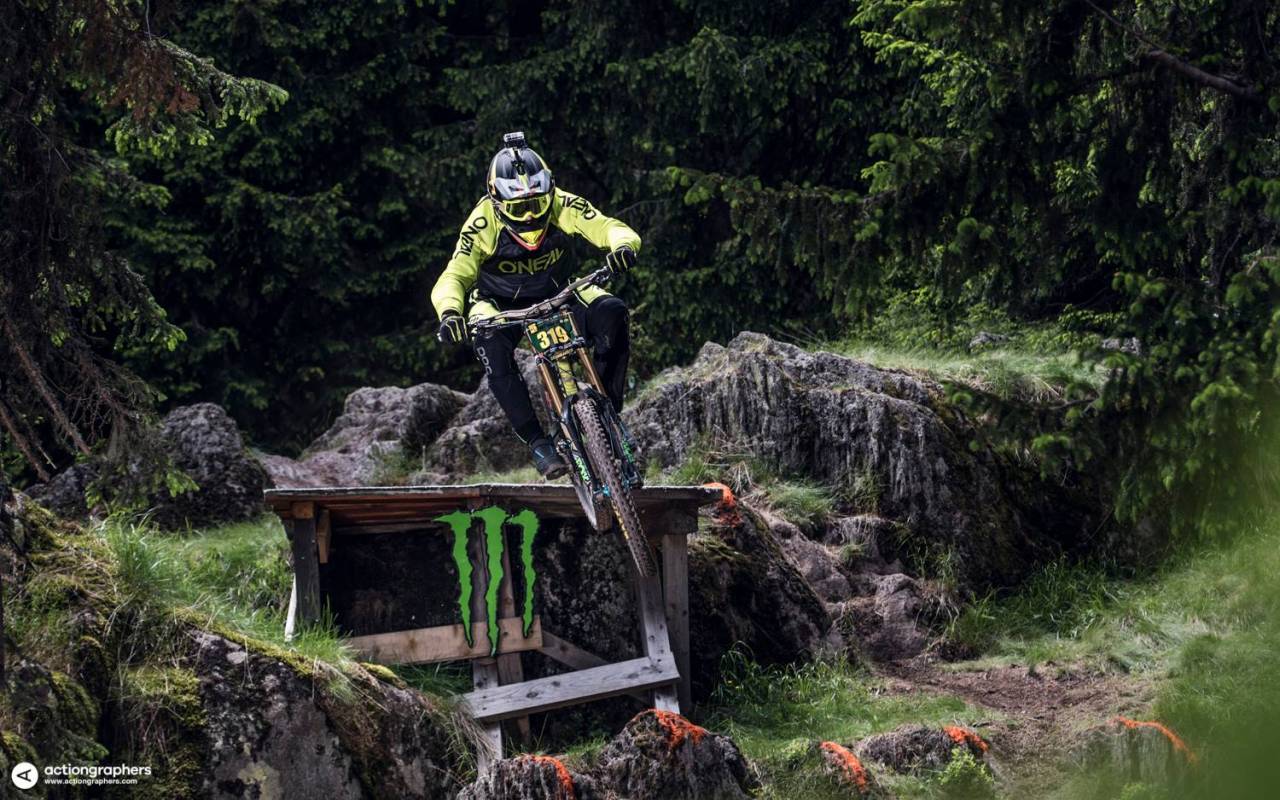 Downhill bikes are heavier and stronger than other mountain bikes and feature front and rear suspension with over 8 inches (20 cm) of travel, to glide quickly over rocks and tree roots. In competitive races, a continuous course is defined on each side by a strip of tape. Depending on the format, riders have a single or double attempt to reach the finish line as fast as possible, while remaining between the two tapes designating the course. Riders must choose their line by compromising between the shortest possible line and the line that can be traveled at the highest speed. If a rider leaves the course by crossing or breaking the tape they must return to the course at the point of exit, unless they do not gain a time advantage from crossing the tape, in which case they can continue with their run.

Riders start at intervals, often seeded from slowest to fastest, and courses typically take two to five minutes to complete with winning margins being often less than a second. Riders are timed with equipment similar to that used in downhill skiing.

The 1st downhill time-trial race took place in Fairfax, California on October 21, 1976 on a fireroad now referred to as Repack Road, due to the need to repack the hub brake after each descent. The bikes used were based on cruiser bicycles that had a drumor coaster brake that worked by pedalling backwards. The mechanism operated with a conical brake shoe being wound on a thread in a metal hub. To prevent the brake from seizing it was kept filled with grease. Heavy use during the descent would cause the brake to over heat, softening the grease and causing it to drain from the hub, requiring frequent repacking. Ten riders descended 1,300 feet (400 m) of Repack road in about 5 minutes.

The first bikes used for descending were known as "klunkers" or "paperboy bikes" - sturdy cruisersusing balloon tires and coaster brakes, designed by Ignatz Schwinn during the Great Depression. The bikes could endure abuse that would damage other bicycles by changing features from the Henderson and Excelsior motorcycles his company had built during the 1920s, including a heavy "cantilevered" frame with two top tubes and 2.125-inch-wide (54.0 mm) "balloon" tires from Germany. Innovations like the fat-tire Schwinn with derailleur gears by Russ Mahon of The Morrow Dirt Club in Cupertino at the 1974 Marin County cyclo-cross and Gary Fisher's 1975 use of a tandem rear hub (from a flea market) with a drum brake threaded for a freewheel cluster developed the sport, and by 1979, two organizers and competitors of the Repack downhill, Charlie Kelly and Gary Fisher founded the company which named the sport, MountainBikes. As mountain biking grew during the 80s, downhill riders continued to use either rigid or limited-travel (under 2 inches (5 cm)) suspension bicycles. Purpose-made downhill bikes started to appear in the 90s, with innovations such as dual crown forks and disc brakes, as well as more elaborate suspension designs.

Later, riders from other disciplines began focusing on downhill, such as BMX racers Daniel Solano (Team Tomac Bikes), and Brian Lopes. Their influence is seen in the increased difficulty of many courses, with bigger jumps and drops added. The coming of age for downhill biking was its inclusion at the first UCIMountain Bike Championship, held in 1990 in Durango, Colorado.

Many ski areas are converted into downhill mountain biking venues in the summer, such as Whistler Mountain Bike Park and Fernie Alpine Resort, and many all-season downhill trails have been specifically developed. At some courses, bikers ride gondolas, trams or chair lifts to the starting point, or "shuttling" with motorized vehicles is used to transport riders to the top of the hill. Others are accessible by riding (or pushing) bicycles to the starting point. Urban downhill courses have also appeared in mountain-side cities, with the courses going through city streets and sidewalks, such as the Taxco Downhill event in Mexico.

Courses used in competition often feature several "lines" through or around difficult obstacles. For example, the "A line" might be a direct line over a large jump with a sketchylanding, the "B line" a smaller jump with a better landing, and the "C line" completely avoids the jumps, but be a longer route. 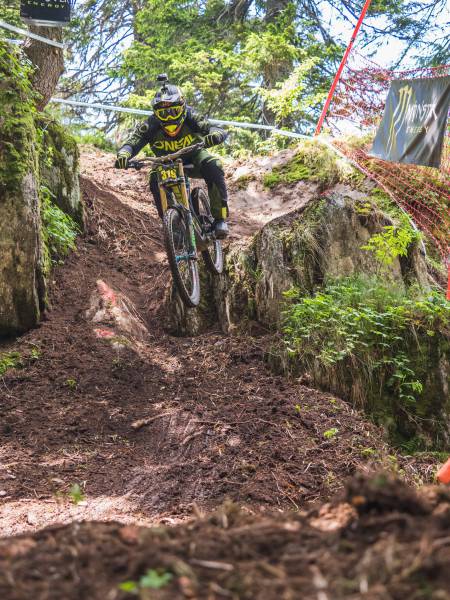