The sport was documented in a 2013 report that identified it as the outdoor sporting activity with the most first-time participants in the United States that year. Variations include flat water paddling for outdoor recreation, fitness, or sightseeing, racing on lakes, large rivers and canals, surfing on ocean waves, paddling in river rapids (whitewater SUP), Paddle board yoga and even fishing.

Stand up paddlers wear a variety of wet suits and other clothing, depending on water and air temperature since most of their time is spent standing on the board.

A related, traditional sport, paddleboarding, is done kneeling on a board and paddling with the hands, similar to a butterfly swimming stroke. The term "paddleboarding" is sometimes incorrectly used to refer to stand up paddle surfing.

Historian and writer Steve West claimed that the contemporary notion of stand up paddle boarding, if attributed to the Waikiki Beach Boys of Oahu during the 1960s, considers that outrigger canoeing should be recognised as the direct link between the idea of standing on a board and propelling it with a canoe paddle, since the individual SUP skills (board riding and paddling) already existed, used by people who had traditionally grown up learning them.

Standup paddleboarding (SUP), the act of propelling oneself on a floating platform with the help of a paddle or pole, traces back to thousands of years ago and across many continents, but its current form and popularity originated in Hawaii in the 1900s. Records of earlier forms of SUP have been found as early as 1,000 B.C. (i.e. 3,000 years ago) and its iterations span over various regions such as Peru, Israel, Italy, China, and beyond. By contrast, the modern form of stand up paddle boarding, where a surfboard-like vessel is used, has a much clearer heritage, dating back to the 1900s and emerging from a collection of loosely related activities by a few very specific characters, such as Duke Kahanamoku and Dave Kalama. Once it reached California in the early 2000s, stand up paddling formed four epicenters, each with its own fountainhead: Rick Thomas (San Diego), Ron House (Dana Point/San Clemente), Laird Hamilton (Malibu) and Bob Pearson (Santa Cruz). From there, the sport gained exponential popularity and California served as the catalyst for worldwide adoption. By 2005, SUP, which had till then been almost entirely a surfing discipline, began to diversify into racing, touring, rivers, yoga, and fishing. Its surfing heritage coupled with its various disciplines made the sport attractive and accessible to everyone all over the world, paving the way for its global growth and enthusiastic adoption.

By the early 2000s, Archie Kalepa and the Hobie Dream Team gave the world a hint that stand-up paddleboarding had a potential far grander than waves. Kalepa began unofficially participating in cross-channel races between the islands of Hawaii, making him one of the forefathers of downwind stand up paddle racing. Meanwhile, in California, three exceptional athletes (Chuck Patterson, Colin McPhillips, and Byron Kurt) joined forces to represent the newly formed Hobie SUP Race Team. These three would show up at local prone paddleboard races, which were just beginning to have SUP divisions, and put on a show of not only performance but also product R&D. Each would carefully pull his board in and out of board bags, trying to keep their edge in product development on the nascent race scene. Sensing and expanding on that flatwater movement, Ernie Brassard (together with Rick Thomas, Bob Pearson, Blane Chambers and a few others) organized the world’s first inland SUP event and race, hosted at King’s Beach on the north shore of Lake Tahoe, California. It was dubbed “Ta-hoe Nalu” and still runs to this day. That event back in 2007 was arguably the world’s first stand up paddle specific event. Around the same time, Nate Brouwer founded the inland-oriented stand-up paddle company “Tahoe SUP,” making a bold departure from the sport’s surfing heritage and diving wholeheartedly into the flat water, inland market.

SUP originated in Africa where it was common practice for individuals to stand on their canoes and use their paddle to propel themselves forwards. This method was used by warriors in an attempt to conduct stealth attacks.

The contemporary form of the sport originated in the 16th century where Hawaiian surfers would surf on boards of up to 5 meters in length. These surfers used a paddle to operate boards that were otherwise unwieldy.

SUP continued in Tel Aviv in the twentieth century where lifeguards stood on wide boards to ensure a clear view of possible swimmers in distress. The lifeguards used a paddle to propel them through the water quickly to rescue swimmers.

In the 1940s Waikiki surf instructors Duke Kahanamoku and Leroy and Bobby AhChoy began SUP as a way to stand on their boards during incoming swells, known as Beach Board surfing.

In the 1990s SUP was taught at Hawaiian surf schools as an alternative way to surf when there was little swell. This practice became increasingly popular so surf instructor Brian Keaulana decided to add ‘’Beach Boy Surfing’’ to the world-recognized ‘’Buffalo Big Board Contest’’ in 2003. The response to this new category was overwhelming, with many recognized surfers choosing to partake.

The first magazine devoted to the sport, Standup Journal, was founded in June 2007

In 2007 the concept of paddle boarding on flat-water began to take serious shape and a year later the first touring board manufacturer, Tahoe SUP, released the "Woody" and the "Zephyr" as a specifically designed, flat-water paddling boards. Since 2008, Tahoe SUP, led by founder Nate Brouwer, has directed the touring industry with innovative designs and materials that differ from that of surf-style boards. Tour Paddle Boarding has become a way for individuals to seek adventure, serenity, personal achievement and a deeper connection with nature. Brouwer introduced a new shape, differing from the traditional surfing styles on the market and created a more accessible leisure activity that could be taken inland; The touring board can carry extra gear and has a more efficient hydro-glide. With Piercing displacement hull, increased volume to carry a payload, and lowered stabilization standing platforms, touring board designs differ from SUP surfing boards significantly. Brouwer met with several flat-water kayak manufacturers and distributors to create features that would allow for more comfort, stability, and efficiency. A major implemented feature from these interactions was the installation of deck plugs. These are a built-in system designed for securing external cargo. The first kayak shop to distribute a touring paddle board was Tahoe City Kayak, and now has rentals, lessons, and add-on equipment sales.

The ultimate emancipation of SUP came back to its roots when SUP fishing boards came into production. Among the first was the Lane family down in San Diego, later a few people off Cabo San Lucas, but it wasn’t till it reached Florida that SUP fishing became a certifiable chapter of SUP history. Corey and Magdalena Cooper, from Destin, Florida, launched a standup paddle company primarily dedicated to fishing, BOTE SUP. Now, the SUP fishing industry has inflatable boards like the Fish Stalker Pro to be more easily transported. And with that, standup paddling became a highly diversified discipline and its core foundations were then in place. 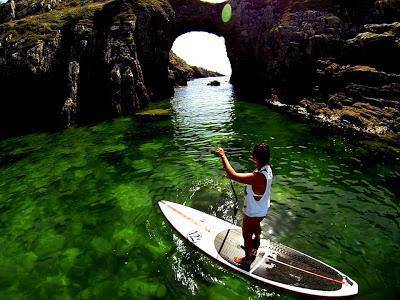