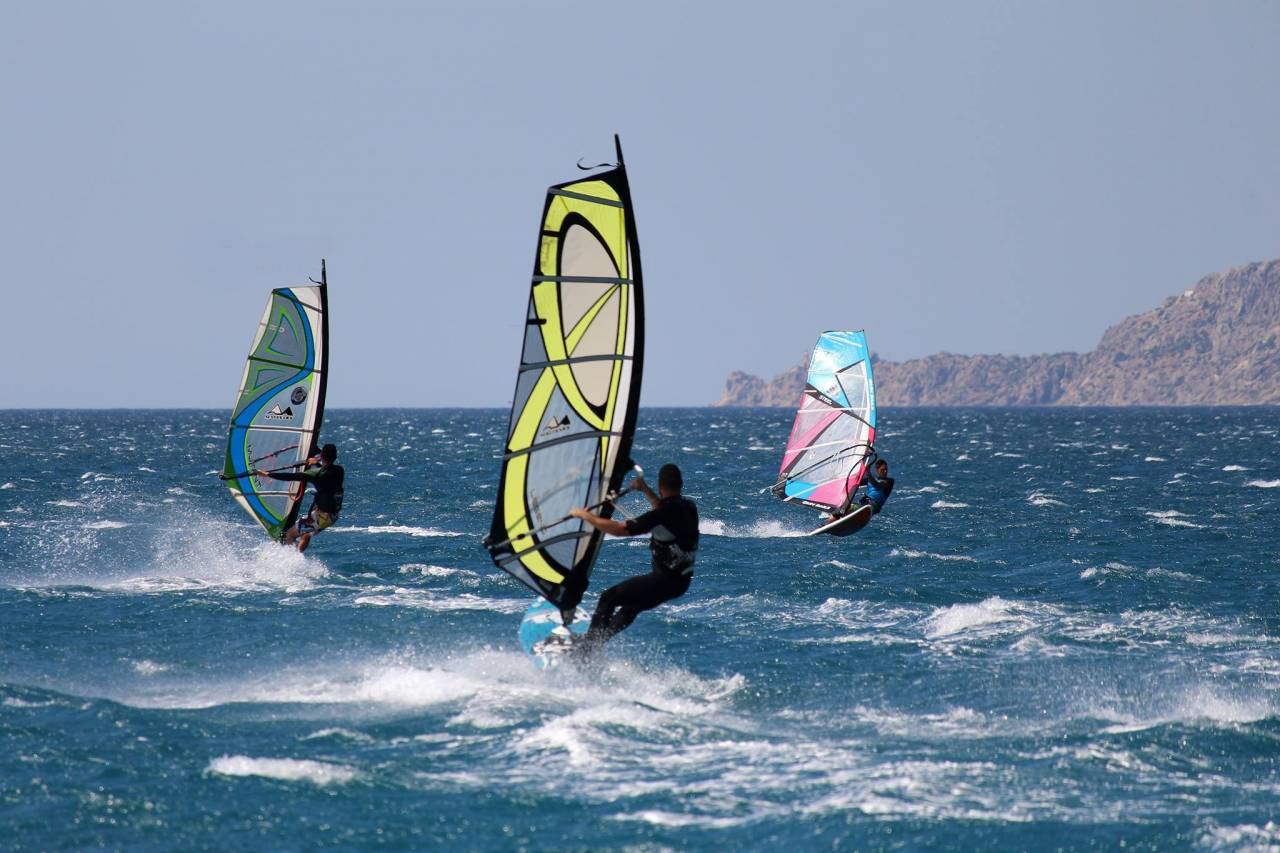 Windsurfing, as a sport and recreational activity, did not emerge until the latter half of the 20th century. But before this, there have been sailing boats of various designs that have used wind as the driving force for millennia, and Polynesians have been riding waves for many of them, undertaking day trips over oceans standing upright on a solid board with a vertical sail.

In 1948, 20-year-old Newman Darby was the first to conceive the idea of using a handheld sail and rig mounted on a universal joint so that he could control his small catamaran—the first rudderless sailboard ever built that allowed a person to steer by shifting his or her weight in order to tilt the sail fore and aft. Darby did not file a patent for the sailboard. However, he is widely recognized as its inventor as well as the first to conceive, design, and build a sailboard with a universal joint. In his own words, Darby experimented throughout much of the 1950s and 1960s and it wasn't until 1963 that an improved sailboard with a conventional stayed sloop rig sail arrangement made it more stable than the one built in 1948. In 1964, Darby began selling his sailboards.

Twelve-year-old Peter Chilvers is often cited for inventing a sailboard in 1958. In the 1960s, Jim Drake was the first to solve many problems of getting the board to sail while Hoyle Schweitzer was the first to be successful in marketing the sailboard.

In 1964, during a discussion on water sports over a brandy at his home in Southern California, RAND Corporation aeronautical engineer Jim Drake and his former Rockwell boss and good friend Fred Payne, who worked at The Pentagon, discussed options for creating a wind-powered water-ski which would allow Payne to travel on the Potomac River. That night they developed the idea of a kite-powered surfboard. On later reflection, Drake didn't like the integrity of the idea and dismissed it. There were already a number of sailboard designs available, and Drake also was concerned about the integrity of a design needing taut wire close to a human body to keep the sail upright.

Still developing the idea, Drake's wife met the pregnant Diana Schweitzer, and the two families became good friends through their children. Drake mentioned the idea to surfer Hoyle Schweitzer who wanted to develop it, but Drake was still unsure of how to control and steer what he envisaged in a design concept as a surfboard with upright sail design, whereby the sailor stood upright on the board holding the sail.

The technical problem was that most boats steer by varying the angle of attack in the water between the centreboard and the rudder, and Drake's question came down to simple operation of how a standing person could control both the power of the sail as well as the direction of the craft.

In 1967, while driving between his home and a contract at the Norton Air Force Base in San Bernardino, Drake had time to reflect on early 17th century based sail ship control. Rudders then were weak and ineffective, mostly used for trimming course. Hence with multi-masted boats, the sailors would trim the upper sails on the forward and rearwards masts to steer the ship.

Dismissing the idea of a design with two upright sails, Drake decided to move the sail by rotation, as moving it linearly would require a mechanical system. Experimenting with a rotational design which became the concept for the universal joint, whereby the angle of attack of the sail to the board could be varied to allow control of both power and direction. Drake finished the design by using an earlier but for them failed invention of East Coast racing sail, and added a wishbone boom

In the 1970s and 1980s, windsurfers were classified as either shortboards or longboards. Longboards were usually longer than 3 meters, with a retractable daggerboard, and were optimized for lighter winds or course racing. Shortboards were less than 3 meters long and were designed for planing conditions. However, this classification by length has become obsolete, as new techniques, designs, and materials have taken the sport in new directions.

Most modern windsurfers (1990s and later) are derived from the shortboard design, and are intended to be used ideally in planing mode, where the board is mostly skipping over the surface of the water, rather than cutting through and displacing the water. Planing is faster and gives more maneuverability, but requires a different technique from the displacement mode (which is also referred to as slogging or schlogging). Generally smaller boards and smaller sails are used as the wind increases.

While windsurfing is possible under a wide range of wind conditions, most recreational windsurfers prefer to sail in conditions that allow for consistent planing with multi-purpose, not overly specialized, free-ride equipment. Larger (100 to 140 liters) free-ride boards are capable of planing at wind speeds as low as 12 knots if rigged with an adequate, well-tuned sail in the six to eight square meter range. The pursuit of planing in lower winds has driven the popularity of wider and shorter boards, with which planing is possible in wind as low as 8 knots, if sails in the 10 to 12 square meter range are used.

Modern windsurfing boards can be classified into many categories:

There are many attempts to bridge the gap between any two of these categories, such as freestyle-wave, freeformula, and so on. These attempts are often successful in their own right, but every shape has its specific strong points and disadvantages. In short, a board with a lot of scoop, rocker or tailkick will turn more easily and respond to footsteering, but top speed and upwind performance will suffer. A board with a straight mid- and aft waterline will plane earlier, thus giving good upwind performance, but will not footsteer without the sailor actively shifting weight. In 2013 a Norwegian inventor Sundin Gjessing patented a prototype board which changes its tail shape with a footswitch - an attempt to combine speed and turning ability into one hull. The board has not been put into production. The original Windsurfer board had a body made out of polyethylenefilled with PVC foam. Later, hollow glass-reinforced epoxy designs were used. Most boards produced today have an expanded polystyrene foam core reinforced with a composite sandwich shell, that can include carbon fiber, kevlar, or fiberglass in a matrix of epoxy and sometimes plywood and thermoplastics. Racing and wave boards are usually very light (5 to 7 kg), and are made out of carbon sandwich. Such boards are very stiff, and veneer is sometimes used to make them more shock-resistant. Boards aimed at the beginners are heavier (8 to 15 kg) and more robust, containing more fiberglass.

Modern windsurfing sails are often made of monofilm (clear polyester film), dacron (woven polyester) and mylar. Areas under high load may be reinforced with kevlar.

Two designs of a sail are predominant: camber induced and rotational. Cambered sails have 1–5 camber inducers - plastic devices at the ends of battens which cup against the mast. They help create a rigid aerofoilshape for faster speed and stability, but at the cost of maneuverability and how light the sail feels. The trend is that racier sails have camber inducers while wave sails and most recreational sails do not. The rigidity of the sail is also determined by a number of battens.

Beginners' sails often do not have battens, so they are lighter and easier to use in light winds. However, as the sailor improves, a battened sail will provide greater stability in stronger winds.

Rotational sails have battens which protrude beyond the back aspect of the mast. They flip or "rotate" to the other side of the mast when tacking or jibing, hence the rotation in the name. Rotational sails have an aerofoil shape on the leeward side when powered, but are nearly flat when sheeted out (unpowered). In comparison with cambered sails, rotational designs offer less power and stability when sailing straight, but are easier to handle when maneuvering. Rotational sails are usually lighter and easier to rig.

A windsurfing sail is tensioned at two points: at the tack (by downhaul), and at the clew (by outhaul). There is a set of pulleys for downhauling at the tack, and a grommet at the clew. Most shape is given to the sail by applying a very strong downhaul, which by design bends the mast. The outhaul tension is relatively weak, mostly providing leverage for controlling the sail's angle of attack.

The sail is tuned by adjusting the downhaul and the outhaul tension. Generally, a sail is trimmed more (flatter shape) for stronger winds. More downhaul tension loosens the upper part of the leech, allowing the top of the sail to twist and "spill" wind during gusts, shifting the center of effort (strictly, the center of pressure) down. Releasing downhaul tension shifts the center of effort up. More outhaul lowers the camber/draft, making the sail flatter and easier to control, but less powerful; less outhaul results in more draft, providing more low-end power, but usually limiting speed by increasing aerodynamic resistance.

The disciplines of windsurfing (wave, freestyle, freeride) require different sails. Wave sails are reinforced to survive the surf, and are nearly flat when depowered to allow riding waves. Freestyle sails are also flat when depowered, and have high low-end power to allow quick acceleration. Freeride sails are all-rounders that are comfortable to use and are meant for recreational windsurfing. Race sails provide speed at the expense of qualities like comfort or maneuverability.

The size of the sail is measured in square meters and can be from 3 m2 to 5.5 m2 for wave sails and 6 m2 to 15 m2 for race sails, with ranges for freestyle and freeride sails spanning somewhere between these extremes. Learning sails for children can be as small as 0.7 m2 and race sails up to 15 m2. 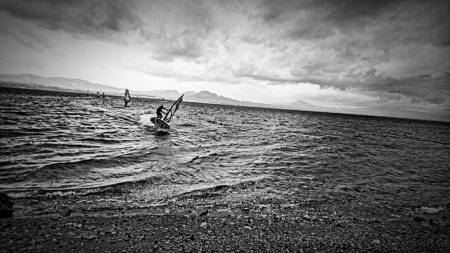 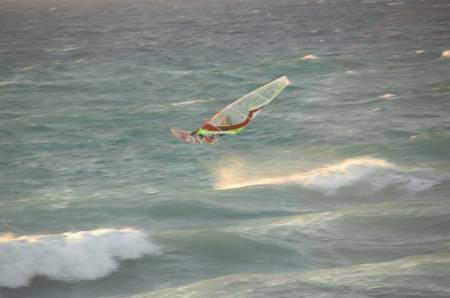